Despite robust levels of new construction, the supply of quality industrial space continues to thin in markets large and small across the country. Major distribution hubs continue to see the most construction and state-of-the-art distribution facilities account for the lion’s share of the new space being built. Supply in mature, infill markets like Los Angeles and the New York area are running at critically low levels, which is forcing big users to look outside preferred areas in order to expand. The industrial base is actually shrinking in some markets, as older product is being repurposed to so-called higher uses. On the other hand, big hubs with land to spare like Dallas/Fort Worth and Atlanta are experiencing record levels of new construction and absorption, along with strong rent growth.

There is good news coming out of markets of all sizes, though, as the e-commerce, shipping, retail and 3PL distribution boom has spread to “last mile” facilities from coast-to-coast. The Amazons and Walmarts of the world continue to gobble up space closer to customers to speed delivery and compete for online sales. The biggest of these players are accounting for a disproportionate share of gross and net absorption and that masks ongoing challenges for manufacturers and smaller users who are left to pick from a dwindling supply of aging inventory that is less efficient but still expensive. Vacancy in the tightest markets has fallen to as low as 1%. 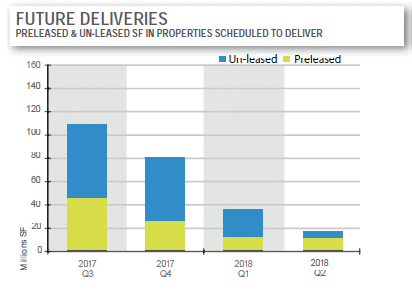 Clearly, it is a good time to be an industrial landlord. With supply and demand in such a state of imbalance, they are demanding longer lease terms and stronger credit without offering much in the way of tenant improvements or rent abatement. In many markets, even tenants who renew in place are getting sticker shock, as their landlords insist on rents that are often more than 50% higher than their current rates.

The Fed made another move on interest rates in June, its third rate hike in six months, yet targets for inflation and wage growth are still not being met. Mortgage rates did increase late last year in anticipation of tighter monetary policy, but not enough to dampen demand for owner/user properties financed through the SBA’s 504 and 7A programs. Supply of owner/user product continues to run short, yet developers continue to focus on large distribution projects that attract the big credit tenants preferred by the institutional buyers who remain willing to pay cash for their projects at historically low cap rates. Though rates remain low, construction lenders, who are increasingly concerned over the potential for a market correction, are tightening up on their underwriting standards, including higher equity requirements. So far, cash buyers are still lining up to pay top dollar for new projects and cap rates remain compressed. Talk of tax reform coming out of Washington is still just that, talk. However, investors and developers will be following more closely as legislation takes shape, especially new rules on expensing, depreciation and 1031 exchanges. 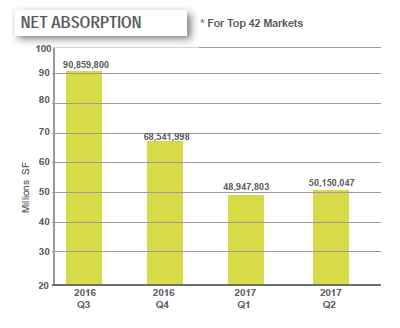 Net absorption in Q2 was 71.76 million square feet, slightly ahead of 70.65 million square feet recorded in the first period. That brings the total gain in occupied space for the past four periods up to a whopping 361.82 million square feet. The e-commerce sector, big shippers and 3PL operators are still the most active tenants, and they have increased their influence with the push for “Last Mile” locations to speed up shipping times, even in secondary and tertiary markets. Amazon.com continues to employ its enormous revenues into expanding its distribution network. The e-commerce giant is expanding its distribution footprint by millions of square feet each quarter, forcing its major competitors into doing the same. Walmart’s recent acquisition of e-commerce player Jet.com is a good example. The world’s largest brick-and-mortar retailer has made known its intention to compete head-to-head with Mr. Bezos’ amazing machine. Amazon is also ramping up its own shipping capabilities, as evidenced by its recent announcement to deploy of fleet of its cargo aircraft. It is fair to say that without Amazon and the competition it has fueled, industrial market would not be flying as high as it is today.

The national vacancy rate for warehouse and flex space across the country was down another 10 basis point to 5.1% in the second period, but in the past four quarters, the vacancy rate has fallen by 30 basis points, and several major market areas still have vacancy rates in the 2% range with little or no construction to relieve tight supplies.

Average asking lease rates of all markets across the country moved higher again in Q2, ending the period up $.10 to $6.22. Markets with the highest levels of construction continue to see the most rent growth, as first generation space, with its greater efficiencies, commands higher rates. However, higher land and construction costs are pressuring developers to push for higher rates. Thus far, the advantages of first generation space have tenants willing to pay a premium to get it.