Last quarter we reported that the US office market was showing signs of fatigue, and from a macro perspective, things didn’t change much in Q2. Vacancy was unchanged for the third straight quarter, average rental rates were done a penny, deliveries were flat and net absorption was just slightly higher than it was in Q1. Sublease inventory also moved up again, continuing its steady rise.

We also reported that major markets including New York City, Los Angeles, and San Francisco posted significant negative net absorption in Q1, as did Houston and Hartford. Year-to-date, those same markets remain in negative territory at the mid-year point. The South Bay/San Jose market leads the pack in net absorption so far this year at over 3.5 million square feet of net gain in occupied space, but that has a lot to do with the fact that Apple moved into its new 2.8-million-square-foot headquarters in the second quarter. 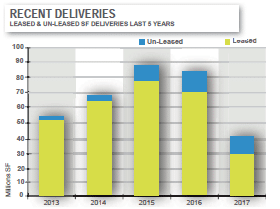 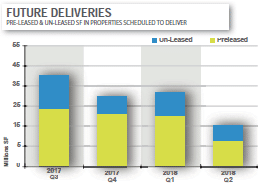 By building class, net absorption remains relatively well-balanced, as Class A and B product reported gains of 13.67 million and 16.65 million square feet respectively. In terms of Suburban versus Central Business District (CBD) performance, the difference is still huge. CBD markets have posted just 930,000 square feet of occupancy gains year-to-date, while suburban markets have increased occupancy by over 12.7 million square feet. Urbanized hubs in suburban areas that are amenity-rich and tout high-density housing near public transportation are outperforming traditional suburbs and core CBDs. Employers choose to locate in these areas to attract and retain younger workers who prefer the convenience of walking to work and entertainment venues. 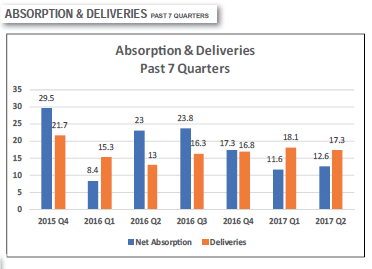 The vacancy rate, which stood at 9.7% a year ago, finished just 10 basis points lower at 9.6%. Vacancy for Class A is up 30 basis points over the past four quarters, while Class B vacancy has declined by the same margin year-over-year. To really understand the vacancy trend requires a more local perspective, as separating the winners and losers becomes apparent at the individual market level. Owners of older office product further from amenities and public transportation are being hit particularly hard. Vacancy in those buildings tends to run higher, which makes it more difficult for those owners to reinvest in their properties to make them more competitive. Northern New Jersey, with its high concentration of legacy corporate headquarters properties located in suburban areas, is a good example of this phenomenon.

Average asking lease rates were fl at in Q2, losing a penny to $24.40 per square foot. However, looking at rents on average is misleading, as the disparity in rent levels and rent growth rates varies drastically depending on local amenities. Cost-conscious tenants who signed leases on Class A space early in the economic recovery, are facing stiff enough rent increases to consider migrating back to Class B properties. Conversely, users looking to create top notch work environments are paying the premium for superior locations, but mitigate the cost by decreasing their space footprint and increasing employee density. Markets with more active tech sectors like San Francisco, Silicon Valley (San Jose/South Bay) and Seattle have experienced the steepest rent increases, but the slowdown in tech employment growth has flattened the rent growth curve. Tech hotspots also tend to have higher costs of living, especially for housing, which means employers have to pay more to find and keep good people.

The level of new deliveries has been remarkably consistent in recent quarters. In Q2, 20.97 million square feet of new office space was delivered, compared to 21.1 million square feet in Q1, 20.75 million square feet in Q4 of 2016 and 21.3 million square feet in Q3 of 2016. Throughout the recovery, net absorption has been strong enough to prevent overbuilding. A notable exception is the office market in Houston, but that’s understandable given the high level of build-to-suit space that was committed to prior to the collapse of oil prices back in mid-2014. Many of those projects could not be stopped and a good chunk of that space showed up as sublease space once it was completed. However, the oil industry has responded by becoming more efficient and reducing the break-even price point for oil extraction.