Demand returned to the overall Orange County office market in the first quarter and rents continued their slow ascent. 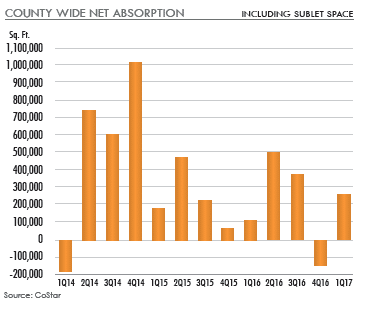 While average rents are a whisker shy of matching the overall market’s pre-crash peak 10 years ago, in other ways the office market has more than fully recovered. Since the bottom, 40 new buildings, totaling more than 4.7 million sq. ft., have been completed. Occupied space has increased 7.1 million sq. ft. and is only 60,000 sq. ft. from reaching the 100 million sq. ft. mark.

The market is healthy enough for a few developers to take some measured risks. Trammel Crow will complete 545,000 sq. ft. of speculative office at the airport this year and asking rents are expected to top $4 per sq. ft. LBA is planning a six-story 180,000-sq.-ft. building at Park Place on Jamboree Road. Also set to get underway this year: an 870,000-sq.-ft. creative campus in Tustin by Lincoln Property and 242,000-sq.-ft. office project on Von Karman Avenue by Hines Interest L.P.

Asking lease rates increased in the last four quarters an average 5 percent and 3.7 percent respectively for Class A and Class B office space – gains that were half that of the previous four quarters.

Among the popular features of creative space are low-rise buildings, highly designed common areas and higher parking ratios that are valued by employers. These projects have attracted a number of 10,000-sq.-ft. tenants but few large tenants have materialized for the open floor plans of 40,000 sq. ft. and up. This is why there was added importance to the 100,000-sq.-ft. Q1 lease of creative space at The Hive in Costa Mesa by the Los Angeles Chargers football team. The team’s ability to build a practice field on an adjacent 3.2-acre parcel cinched the deal. 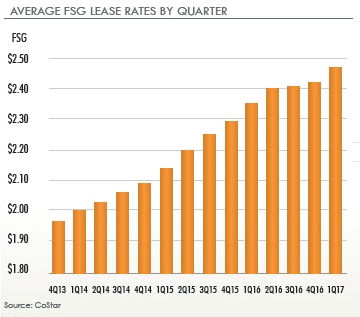 Also, late in the first quarter a unique office property appeared on the market – the 65,000-sq.-ft. campus of Trinity Broadcasting Network just off the 405 Freeway in Costa Mesa. Lee & Associates agents, who toured about 20 prospective buyers and tenants in two weeks, say the six-acre property is drawing strong interest for the building’s low profile and nearly 6:1 parking.